A Shrewsbury care home has found an innovative way of supporting residents living with dementia – by creating a cafe, train station and bus stop in the grounds. 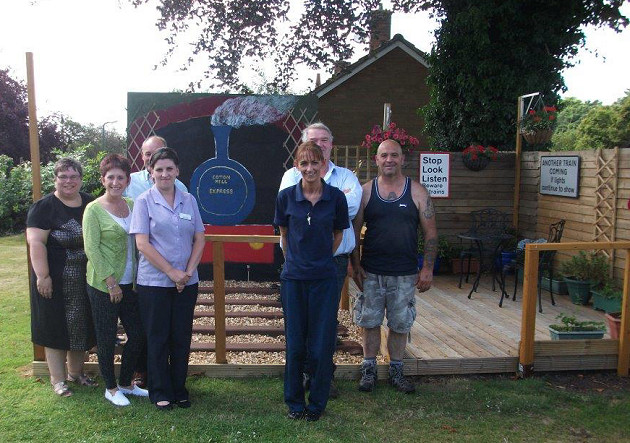 The idea for the project came from Coverage Care carer Trish Dawson, following the publication of research which found green spaces reduced levels of agitation and anxiety in people living with dementia.

Coton Hill House manager Alison Gough said: “The Forget-Me-Not dementia garden helps stimulate memories for the people we care for. Researchers at the University of Exeter Medical School found gardens provided sensory stimulation for people living with dementia in an environment which can trigger memories, which is why we included a train station and bus stop.”

Coverage Care is a dementia care specialist, developing both a Royal College of Nursing Accredited Dementia course and adopting a pioneering scheme which has seen residents’ experience fewer falls, maintain healthy weight and have medication reduced.

Mrs Gough added: “We pride ourselves on our understanding of dementia and how it affects those who live with the condition and their families. We wanted to be able to include somewhere for people to have a cuppa and a biscuit, so we opened the Forget Me Not cafe which has proved really popular.

“Visitors have also enjoyed the cafe, taking residents for a cup of coffee and we’ve even held cafe quizzes. The cafe and the garden give residents an opportunity to relax in a calming setting, but also to remember skills and habits which they may have forgotten.”

Last year, the team at Coton Hill House transformed a disused summer house in the grounds after two residents in their 80s came up with the idea of turning it into a pub.

Read the full article at: http://www.shropshirelive.com/2014/08/22/garden-cuppa-helps-those-living-with-dementia/#.U_b5LuPUCuk.twitter